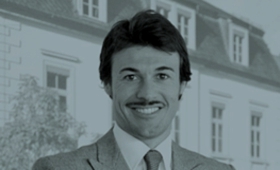 Luca is a highly regarded expert in the luxury sector and a Brand Ambassador, with more than 25 years’ experience within international firms such as the Compagnie Financiere Richemont SA, the second-largest luxury holding group worldwide, Ferrari SpA and Maserati, including positions at global giants Unilever and Johnson & Johnson.

For nearly a decade he was General Manager and Brand Director at Richemont, being responsible for over 20 countries for one of their most iconic brands, A. Lange & Soehne (high-end timepieces). During this period he was also the Brand Ambassador for Europe, Russia and CIS countries.

Previously, Luca worked for eight years at Maserati’s HQ in Modena as Head of Global Marketing and Communications, contributing decisively to the significant relaunch of the brand under Ferrari. He led Maserati’s reintroduction in the USA after 20 years of absence, launched the Maserati GranSport, Quattroporte and GranTurismo models, and boosted the global brand revamp under the “Excellence through Passion” positioning campaign. The significant visibility of the Maserati brand in a number of Hollywood movies is another tangible example of Luca’s work. His experience in the high-end auto sector includes being the Sponsorship and Communications Brand Manager at Ferrari throughout the iconic Michael Schumacher period.

Luca holds a Master’s degree from the Politecnico University of Milano. He has won a Unilever Award of Excellence and was included in the Wall of Fame of the Accademia di Comunicazione of Milano from where he also holds a Master’s in Business Marketing and Communications.