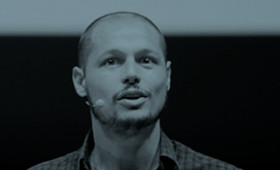 Sergio Alvarez-Teleña is considered one of the "Top Analytics Superstars" by UK's Digital Economy Network. Both an Economist and Computer Scientist, his research in human-bot convergence has been recognised by the UK EPSRC (Engineering and Physical Sciences Research Council) for its impact in the digital economy.

Before founding SciTheWorld (Himitsu Tech), a start-up focused on augmented machines and algorithmic research where he is Chief Innovation Oficer, he was Global Head of Data Science and also Global Head of Algorithmic Trading at BBVA. In 2016, during his tenure at BBVA, he received the prestigious Banking Technology Award for developing the "Best Trading Platform" in the finance industry.

Sergio has been consistently swinging between academia and industry, in a journey that has taken him through CEMFI (Bank of Spain), Deloitte, Kyoto University, Santander, Morgan Stanley and the Centre for Doctoral Training in Financial Computing & Analytics at UCL in London, where he is also Honorary Senior Research Associate. He has featured as speaker in TEDx, Telefonica, BME and Oxford's Altius, amongst other professional and academic events, and he is frequently featured in the press. More recently, Sergio has been appointed by the Spanish Ministry of Economy as expert on AI Innovation & Marketing to the OECD-based Global Partnership on Artificial Intelligence (GPAI).